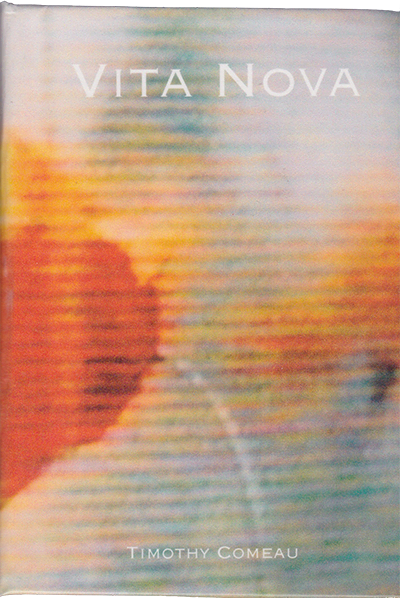 Vita Nova is the product of creative writing I began in the summer of 1999, and by the end of that year I was curating it to assemble a narrative divided into four parts. A guiding theme was a summation of my experience growing up in Nova Scotia ("vita nova scotia") but it also repurposed the title of a work by Dante Alighieri, whose work I then understood as a summation of the 14th Century zeitgeist. I too wanted to capture the spirit of the age and record what it was like to grow up in the late 20th Century.

The book was originally produced in 2000 as a handmade artist book, printed on 4x6" index cards with an HP laserjet printer. It was distributed as a gift through the years 2000 to 2003 as a numbered edition. The handmade version had six different cover designs, and each had an assigned ISBN. I kept a log (reproduced below) to record who they were given to.

In 2009–2010 I created a print-on-demand copy via Lulu.com. In 2021 I revised it to produce a hard cover version more in line with the orginals.

A copy of Vita Nova was exhibited twice: The first was the Overtime @ Workplace show in May 2001, and the second was at my solo show in March 2003 at the Zsa Zsa Gallery ("Music for Lawyers"). 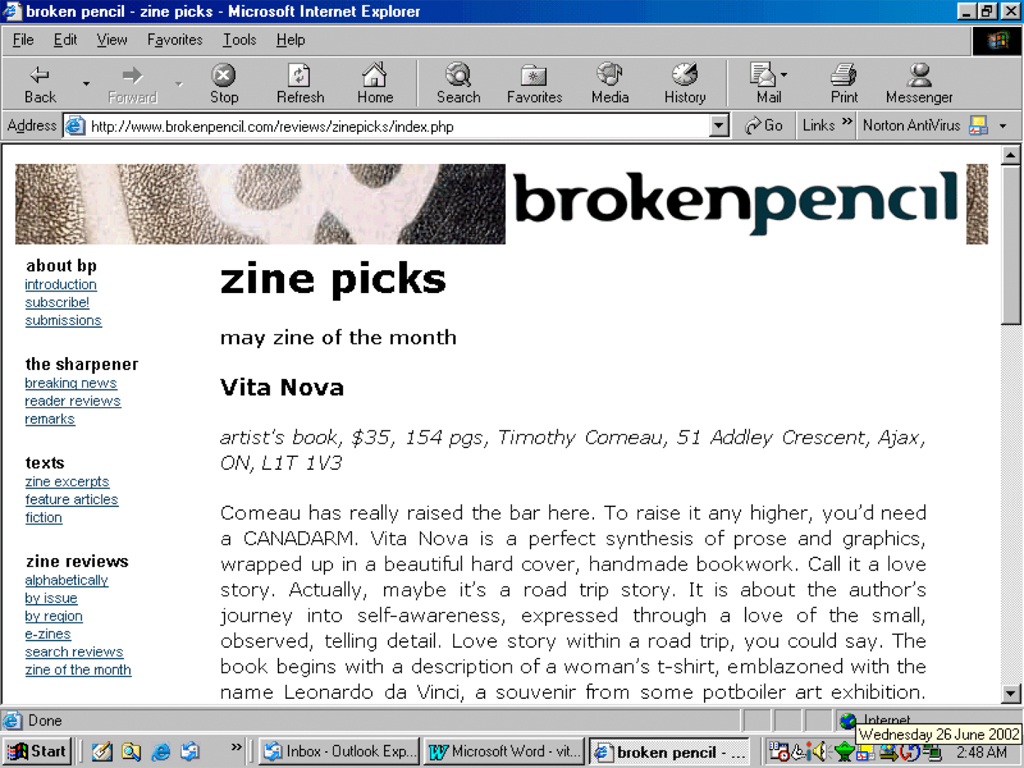 2001-07-12: Andréa Lalonde's is inscribed with a to/from
2001-07-19: Gretchen Skye's is inscribed with a to/from
2001-08-15: A Notes on Being only was printed on 15 August due to a printer error
2001-09-11: I discover while printing RM Vaughn's, that the picture Hannalore Reaching, has disappeared from the file. Even stranger, the fact that it has disappeared from the backup file on the zip disk as well. I thus find it on the hardrive and reinsert it. Checking the three that I have bound already, I notice that it is absent from the one I printed for Thea on Saturday (8 Sept). It was not absent from the one I printed for Sasha on Thursday. The third book that I had bound on the weekend was the one I had intended for Micheal Fernandez. I had thought about using this one to give to Thea, but I wanted to give her a Tuscany cover, and it was already ISBN'd for the Yellow Cover. Since she did not choose a cover, I am going to give her this one, and the one I had printed for her is now an artist proof, which is a piss off, but whatever, it'll find a use one day.
2001-09-12: I bind Thea's with the Tuscany cover after all. Last night I had printed a Yellow Bridge cover, only to discover that the ink was running out, and it was streaky, so I couldn't use it. So, I simply printed an ISBN sticker (which was faded due to the whole ink thing) and stuck it over the Yellow Bridge number which had been printed in the back.
2001-09-14: More problems because of the stupid disappearing picture. Rereading the book on the computer (to revisit it I guess, want to see just what I have exposed to Thea and Sasha now…) I find that the line "From an email from the month of May" in the Notes on Being Reprise section, has shifted up so that it lies under the part where Gretchen told me I was beautiful. I sort of liked this effect on the screen, but then thought, oh shit! It is present in Vaughn's … I figure this is because of the picture, I doubt it's present in Sasha's or Thea's. I corrected it nevertheless. It seems that everyone is so impressed by the quality of the binding (by that I mean, since it looks so good, rather than being actual 'quality' binding…) and the uniqueness of it to their experience so far ("you bound this yourself?!") that no one is going to care about typos and what nots. I aim for meticulousness, and yet, the whole hand bound thing means it's going to be rough around the edges inevitably. That fact is one of the nice things about the book, that it looks machine made, but it's not…
2001-09-22: I intended to give Janis her book on Friday the 21st. I expected to see her at one of the three openings. I didn't see her, but dropped it off in her board member mailbox at Mercer Union this morning on my way home. I sent her an email to tell her this.
2001-12-10: Jenny told me on Th. 6 Dec 2001, after the Mercer opening, that pages of her VN had fallen out, but that she liked that. To her, it made it more precious, and she was able to replace them in the way that she wanted.
2002-03-20: I visit Sasha at her apartment, and check out the book I gave her. I noticed one of the pages had come loose.
2002-03-22: Given to Andrew Kear, so that he could give it to Brie.
2002-07-22: Computer change-over in May resulted in loss of fonts. Had to reformat the books, chose new fonts for the design.
2002-07-22a: Kathy wanted a picture substition, the “tangled girls” doodle in place of “Hannalore Reaching”.
2002-10-22: This is first fully revised book. Kathy's used the fonts "Back to 1982" on the title page and "snootpixel.org" somewhere in the text. This copy uses the font "intimacy" on the title page, and is set in Times New Roman, rather than Agaramond which the older versions (pre new computer) were set it.
2003-01-17: I determined that the print run of VN in total should be 40. That is, with 31 made, I only need to make 9 more and I can close the project down. Having offered it for sale earlier in the week on the website, I priced it at 50$ to discourage interest, since I don't want to be inundated with orders.
2003-02-09: I reformatted the text with the restored fonts.
2003-02-14: I modified the edition number to be 45
2003-02-18: AP 37b - I put a Glowing Green cover on it and used it as a "cover model" during my Music for Lawyers show.
2003-05-31: This book was printed with a Glowing Green ISBN but a sticker replaced it to the appropriate Tuscany cover. This book was submitted as a prize at the YYZ Fundraiser, Trixxx, on 31 May 2003