The Analogy of the Whale 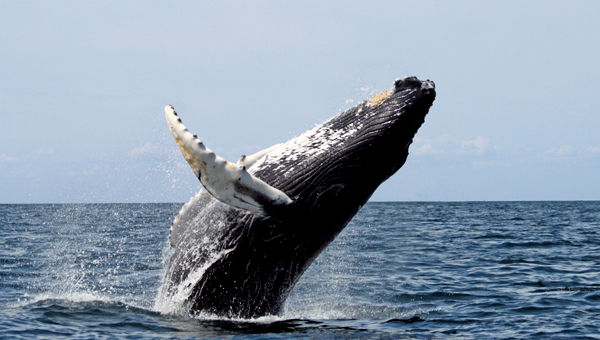 Wales are intelligent mammals that spend their entire lives floating in the ocean. Yet they need to breath so they are continually in contact with the boundary between the water and the air.

Occasionally they breech and launch themselves out of the water before falling back down into it.

Whales have minds, and they communicate to one another. Their natural sonar allows them to not only communicate over vast distances, but allow them to “see”. The nature of sound means that they can likely perceive through things – so that if we found ourselves swimming with a whale, we would be as transparent to them as a jelly-fish is to us.

So whales know about humans and glimpse sunlight, they breath air, and they jump into it while feeding. While a breached whale has an experience of gravity, it can never know what it is like to jump on land as we do. Further, we could never explain to it that it’s not only possible to jump so high that you can see the entire world as a ball, but that you can jump all the way to the Moon. These are realties that we understand as beings occupying this slice of reality, at this point in Time (a century after the development of flight, and over fifty years since the Moon landings). Our human minds are flexible enough to comprehend the dimensions that exist between the depths of the ocean and the heights of outer space.

In the sense that we are ground-based, we are back-and-forth two-dimensional creatures. It is only in the past century that we have been able to be three-dimensional and fly like birds and navigate the oceans with submarines like whales.

Whales swim, we walk, and birds fly. We are in between both.

Just as whales spends their lives at the sky and ocean boundary, we too spend our lives at the boundary between earth and sky; while the whale glimpses land, we glimpse Divinity.

Traditionally we have used the language of light to understand this: our minds are illuminated by the sunlight of God. Our illuminated minds understand the range of dimensions between the depths of the oceans out to Outer Space toward the Big Bang and the greater structure of the Universe. We’ve built his understanding from speech and math.

While we cannot walk in the Divine any more than a whale could walk in our cities, we are both animals breeching into a metaphorical Heaven.