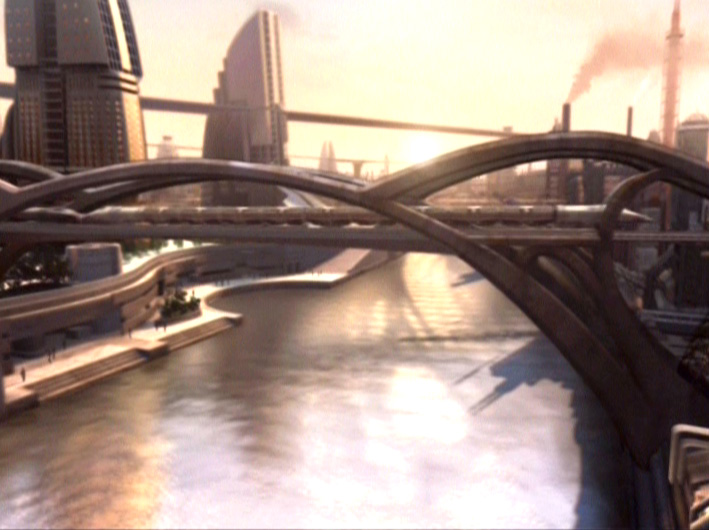 Figure 1 above is actually from an episode of the Star Trek series Enterprise. It came to my attention the other day through a montage depicting history in another episode of the series. As fans of the show know, one of the running plots involved time travel, and the depiction of human history ‘resetting itself’ (after plot related meddling) was done through the use of images from various sources grouped together into thematically recognizable decades. So the 1980s were depicted by images of Ronald Regan, Margaret Thatcher, and Ruhollah Khomeini, the 1990s by images of the Clintons, George H Bush shaking the hand of Mikhail Gorbachev, etc. After the depictions of the first half the present decade (scenes of 9/11, Bush & Blair) it moves on into speculation. (The images from the stream are available here). The future was represented by a car and a robot and from then onto scenes of the show’s 22nd Century, marked by the opening shot of the series, the launch of the Enterprise spaceship, in the year 2151 (Figure 2). 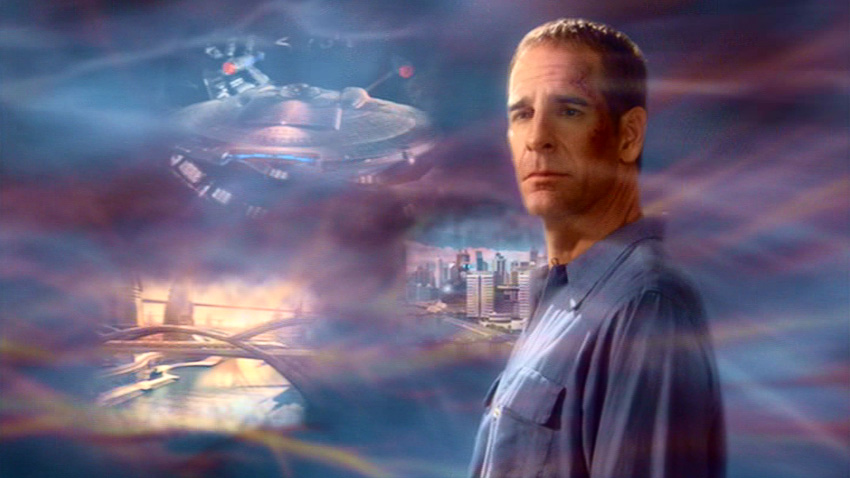 Figure 2 • Captain Archer in the Timestream

The 22nd Century is therefore marked by two cityscapes, one being that of Figure 1 the other being the following. These are meant to be Earth cities given the context of the time stream, but both shots are re-used production art from previous episodes. As I’ve mentioned, the cityscape below is from a Season 1 show (‘Dear Doctor’), while the bridge above is from an episode of Star Trek Voyager‘s last season (‘Workforce Part 1′). 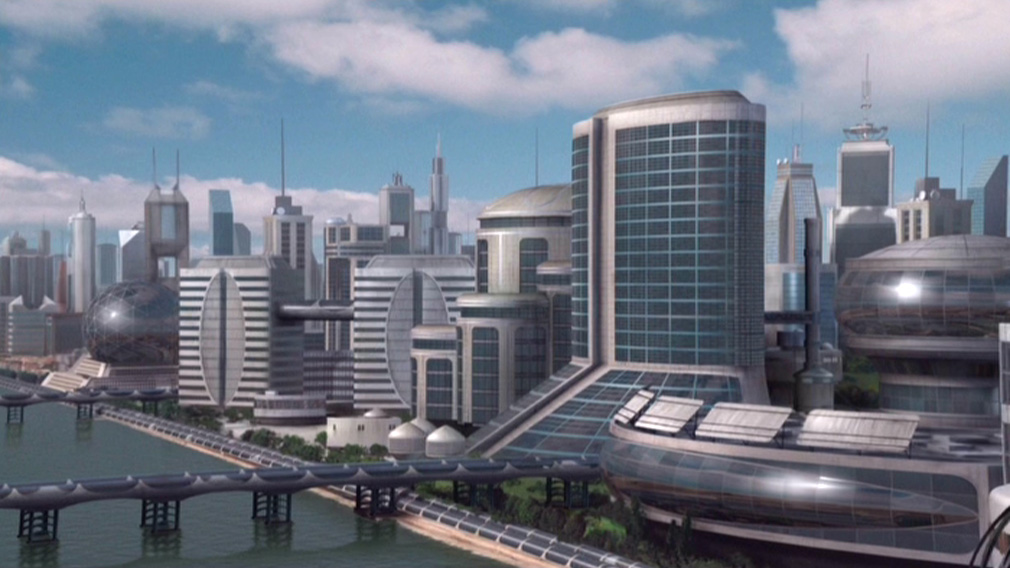 With regard to Figure 3, because it is otherwise unlabeled and supposed to depict an Earth city in the 22nd Century, I thought it might as well be Toronto. We can imagine this stretch of waterfront as being a bit to the East, or a bit to the West, of the CN Tower thus accounting for its absence (you're invited to Photoshop it in). We can imagine the bridges are subway extensions to the island, and we see that a similar subway/covered LRT path runs right along the water.

This being an image originally from s-f, it reflects the current architectural trends of the beginning of the 21st Century, the postmodernist appreciation of angles, glass and concrete.

But I present this image to you thus as a reflection of what kind of city we’ll get if this century is to be one of starchitects. This is what another hundred years of Frank Gehry and Daneil Leibskinds will result in.

Does this city look like a place you’d want to live? We can spy green-space but it seems very sparse. And don’t give me the old, ‘who cares I’ll be dead’ routine, so common from the likes of the Baby Boomers. It’s precisely that type of attitude which has gotten us our present shit world, and I don’t want to encourage more of that. Given the extension of our lifespans over the past century, it’s not unreasonable to suggest that this could be the city of your elder years, so take the question seriously: is this where you want to hobble and feed pigeons? 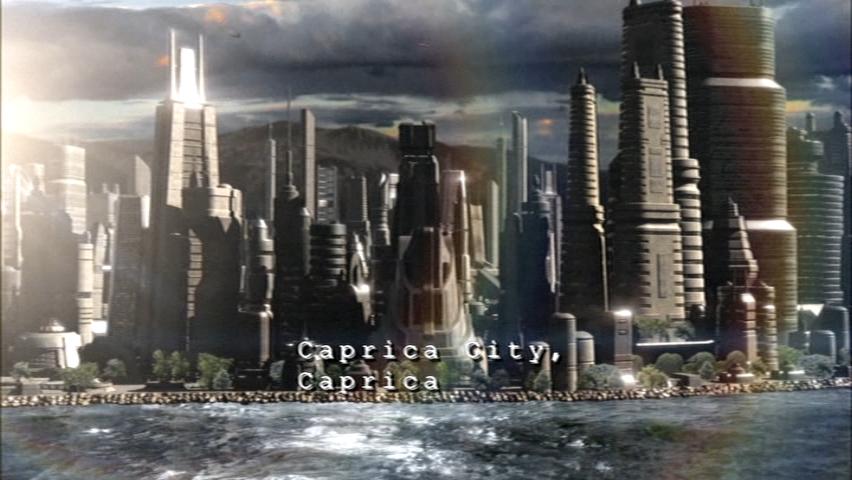 A much more dramatic depiction of the type of city we could end up with it that from Battlestar Galactica. Filmed in Vancouver, perhaps one could label this ‘Vancouver 2210 AD’ since it seems a bit more harsh than the aesthetic presented above, as if one needed another century to get both the flying cars and the brutal deadness of the civic space: 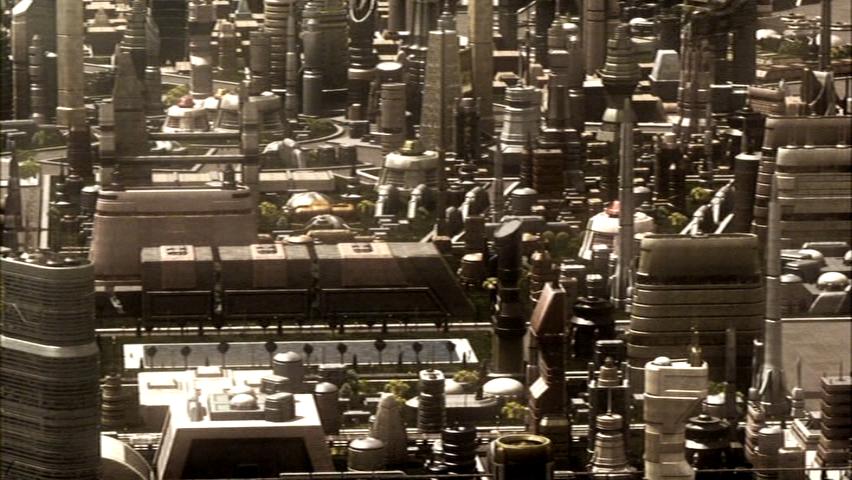 The real nightmare of urban development is this uniform cityscape of similar buildings, all equally unadorned, apparently utilitarian, with a neglected use of green space.

As spaces designed on computers to provide semiotic scenes meant to convey an advanced technological civilization, these reflect in turn the imagined futures of our own civilization. This is what we could end up with. But, in all likelihood, my guess is that the 22nd Century will not look like any of these images.

When Martin Rees published his book Our Final Hour in 2003, he famously gave our ‘civilization as we know it only a 50-50 chance of surviving the 21st century.’ (source) Now there’s some ambiguity there: others predict the potential extinction of humanity, which would certainly ruin our civilization, but it could also anticipate a sort of apocalyptic collapse into another form of Mad Max Dark Ages.

But I have to point out the civilization known to the British in 1903 – and globally, that of every other nation and ethnic group on the planet (with the exception of those still living isolated tribal lifestyles) did not survive the 20th Century. The British Empire fell, the reliance on coal was replaced with that of processed crude oil, and the colonial projects of the era came to ignominious ends – the consequences of which we are still processing. Given how squanderous of natural resources our present civilization-as-we-know-it is, there’s no reason to want it to survive the 21st Century. 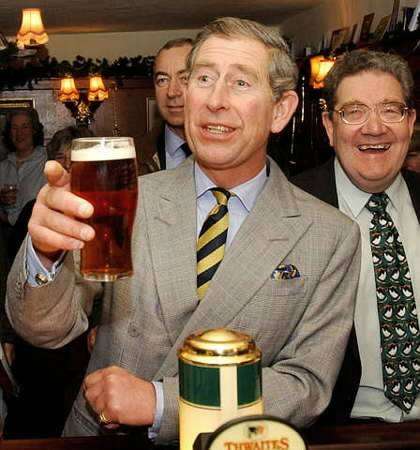 Which brings me to Prince Charles, who by the times spoken of here will be thought of as King Charles III. In the early 1980s, Charles was mocked by the media for his interest in organic farming, and he’s currently thought of as daft for his architectural interests, including his sponsorship of the community of Poundbury. Poundbury is the result of Charles’ interest in the work of Leon Krier and Christopher Alexander. As the Poundbury website records:

Poundbury is a mixed urban development of Town Houses, Cottages, Shops & Light Industry, designed for the Prince of Wales by Architect Leon Krier on the outskirts of the Dorset County Town of Dorchester. Prince Charles, The Duke of Cornwall, decided it was time to show how Traditional Architecture and Modern Town Planning could be used in making a thriving new community that people could live & work in close proximity. Poundbury has now become World Famous as a model of urban planning, with regular visits from Councillors and MPs. Welcome to the Poundbury Community Website!

Given how Charles has already displayed some prescience when it came to organic agriculture, anticipating both its sense and its popularity, my expectation is that he’s once again onto something with his interest in such small-scale, community oriented architecture. The end result will be cityscapes of the 22nd Century which will not reflect the imagined exaggerations of the present shown to us through easy digital mock-ups.

I return now to the city of the bridge. When I saw this in the Timestream montage, the lines of it brought to mind the position just stated: that by the 22nd Century, technological advance combined with a rejection of explicit postmodernist, angular, and Leibskind-like egotism will brings us a meld of the tradition and the technological. The bridged city seemed a place inspired by Lord of the Rings, a technological version of Rivendell.

Given a choice between Caprica or the Toronto of 2110 suggested here, I’d take a Rivendell of any season, of any weather condition. Of course, I expect to be able to continue to use a high speed internet connection, use a cell-phone, browse in an Apple Store, and be able to have sushi. The point here is we can take much more control over our built environment, and expect more from our architects than glass and concrete. Letting current architectural fashion guide the next several generations will only result in a Caprica-like monstrosity.