Reflections on a Subway Sandwich

Twenty years ago in September 1993, I was a fresh-faced frosh at Saint Mary’s University in Halifax Nova Scotia. I had visited Halifax on weekend family trips while growing up in the province, but this was the first month of what turned out out be a six year experience of living there.

With some free time, I took a walk downtown. The path tended to be: Inglis to Tower Rd to South Park, to Spring Garden Road. From here, I ended up walking to Barrington St.

I remember protests regarding Clayoquot Sound around this time, being held across the street from the library at Spring Garden and Grafton but I’m not sure if they were visible on this particular walk, wherein I found myself further down into the historic properties.

I found a Subway sandwich shop, and stopped there for lunch, and recall being surprised when I was offered both mustard and mayo as a topping, a combination of which I had never encountered before.

Unbeknown to me, I had wandered onto the grounds of NSCAD, the art school where I would begin classes three years later. Occasionally while at NSCAD, I would look down from the library at Subway at the intersection and recall that first walk when I began to discover my new city. For that reason I took its picture. 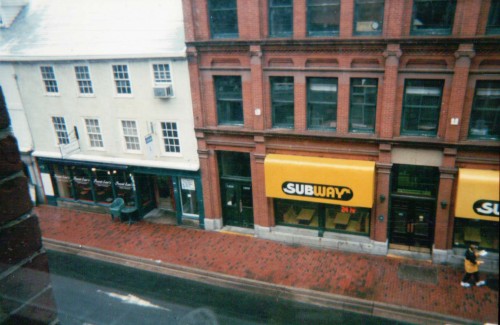 The Subway, as seen from the NSCAD library in 1999

Eight years later I began to be interested in computer programming and the web. Using books I began to figure out how to build web pages, and I was reading Slashdot everyday. There was also a website called NewsToday® (later rebranded to QBN) which aggregated news items of interest to designers, and if I remember correctly, it was through that that I found YoungPup.net, where Aaron Boodeman (youngpup) had posted “the best way” to generate a pop-up window in Javascript. (I found the post with the WayBackMachine, timestamped Sept 19 2002). From what I recall through his blog, through a link or a reference, I learned about Aaron Straupe Cope. Through his posted online resume, I learned that we shared NSCAD as an alma mater.

“If anything I studied painting but I am mostly part of that generation for whom everything changed, and who dropped everything they were previously doing, when the web came along.” – Aaron Straup Cope (Head of Internet Typing at the Smithsonian Cooper-Hewitt National Design Museum), in his post Quantified Selfies

While I was eating my sandwich twenty years ago, he was probably in the building next door taking Foundation courses. His online resume also tells me that he was around during my first year, graduating at the end of term.

Twenty years ago the future both lay before us in a tapestry of September sunshine, but just as the future of twenty years from now is being invisibly incubated, nothing was then evident. It was the first year of the Clinton Administration and Jean Chretien’s Liberals were about to win the general election. The 90s were effectively beginning.

When I first started reading Aaron’s blog about ten years ago, he was living in Montreal. Later through his blog I learned he was in Vancouver, and later still, he was in San Francisco. I imagined CDs bought at Sam the Record Man on Barrington St that may have accompanied these travels. Reading his blog, I understood he was at Yahoo!, working on a site called Flickr.

Seventeen months ago, the Google Streetview car captured the corner as it then appeared. Here it is, posted to Flickr. 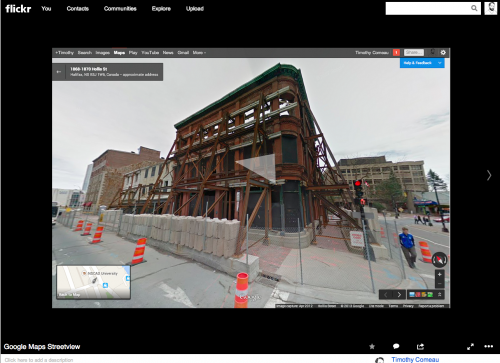 So I reflect now twenty years later on how a website like Flickr (which was big in its day and which now lingers on as an established presence) became part of the world that did away with typewriters for my generation and younger, and was in a way present at the GPS coordinates where I ate a Subway sandwich twenty years ago.